You should start the creation of a new character by creating a blank character template. In order to do that, use the following options in the menu: File -> New -> Template -> Creature. It will create a blank template. A part of the settings will have the default values but most of them are to be filled in with proper values.

The screenshot below presents a part of the template describing an Alp vampiress. As you can see, most of the fields have been already filled in. 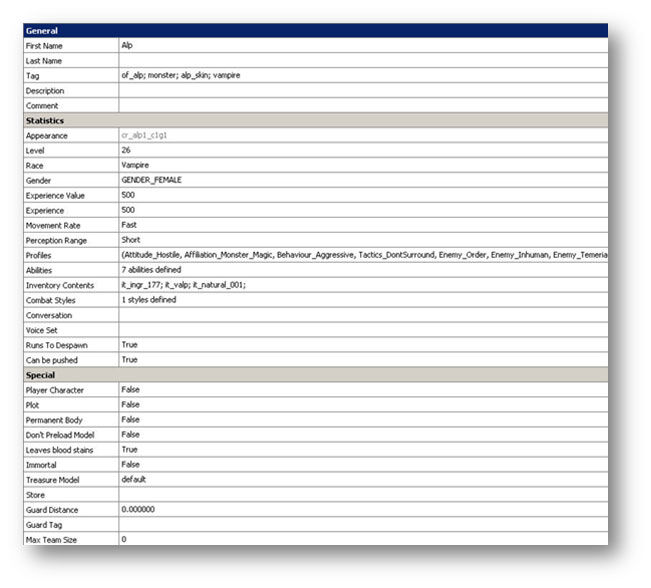 First Name, Last Name: These fields describe the character. The text placed here will be displayed over the character during the game. It is also possible to choose the language version of the entered text.

Tag: Here, the flags describing a given character are to be placed. Its content is used mainly in the scripts.

Comment: The filed for comments. It serves as an information field. Its content is not used during the game.

Appearance: Here, you can determine the looks of the character. Choose one of the available models.

Race: Determines the race of the character. Choose it from the list.

Gender': Determines the gender of the character. Choose it from the list.

Experience Value, Experience: These fields determine the basic value of experience given to you when you’ve killed the character. The value is modified by the proper coefficient resulting from the level difference between the killed character and the player. The numbers in these two fields should be identical.

Movement Rate: Determines the speed of the character. Choose it from the list.

Profiles: Determines the actions taken by the character. They depend on the circumstances arising in the game and on the player’s actions. The value of this field contains a number of flags chosen from the list. In the next point you will find the description of the most important settings.

Permanent Body: This flag determines whether the body of the character changes into a skeleton after its death or retains its original looks. The flag TRUE forces the body to retain its original looks. Leaves blood stains: The flag determines whether the character leaves the blood stains. Store: This field determines the template of the store available for the player after choosing appropriate dialogue options.

The field Profiles in the character’s template contains a number of flags. Their proper setting determines the behavior of the character. The available options can be divided into the following groups:

Tactics_DontSurround: Characters of the game try to surround their adversary by default so that at least one of them can attack from behind. The setting of this flag will switch this mechanism off and the attackers will surround their victim in a random manner. Enemy: Determines to which groups a given character is ill-disposed. It works in connection with Affiliation. The character will attack the adversaries who are set with at least one position from the Enemy list in their Affiliation.

The definition of the character’s abilities is executed through a special dialogue window. 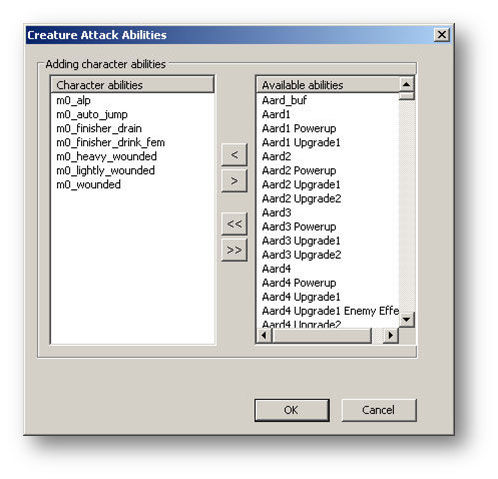 As you can see in the above picture, there are two separate areas. Character abilities describes the abilities of the character. Available abilities is a list of all abilities available in the game. You are to choose those you think the character ought to have. New abilities should be added in the .lua files located in the Data\Scripts\Definition\Abilities directory.

The definition of the character’s combat styles is executed through a special dialogue window. 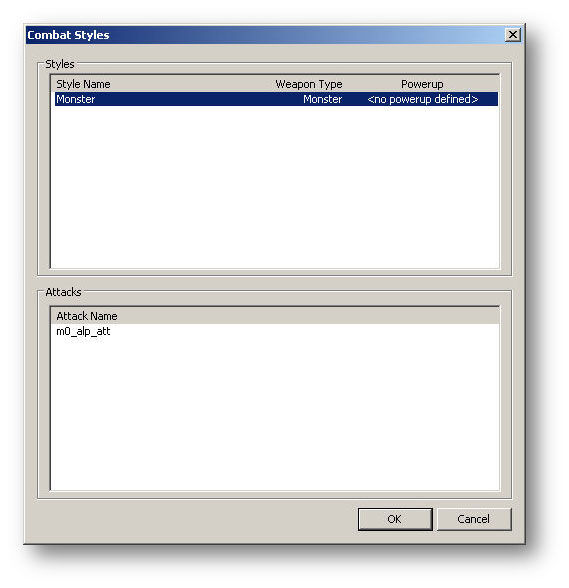 The window is divided into two parts. The upper one is used to define the Styles available for the character. The lower one describes the attacks assigned to the respective styles. In order to define a New Style, click the right mouse button and choose Add Style. A new dialogue window will be displayed. 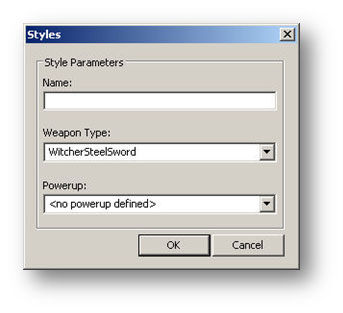 The Name field requires a name of the combat style. The name must be chosen from the list below:

•SwordWithShield – any weapon used together with a shield

Choose the proper type of a weapon from the Weapon Type list. It should agree with the type described in the style name. There are the following exceptions to this rule:

The Powerup field is not used.

When the style has been defined, add attack sequences to it. In order to do that, highlight a line in the Styles table that corresponds to the modified combat style. Next, click the right mouse button on the Attacks table and choose Add Attack option. Choose appropriate set of attacks from the new dialogue window. This set is defined on the list as one ability. Similarly as in the case of the basic statistics the definition can be found in the respective .lua file located in the Data\Scripts\Definition\Attacks directory.

Retrieved from "https://djinni.fandom.com/wiki/Creation_of_new_characters?oldid=10119"
Community content is available under CC-BY-SA unless otherwise noted.