Creation of passages between locations

The two most important elements in the creation of passages between locations are: Places of entry – Doors and Places of Destination - Waypoints. Generally, doors are integral parts of location and they cannot be easily shifted or added in a new place.

In the Area Editor, double click on the door in use. As a result a new window (shown below) should appear on the right side of the screen. 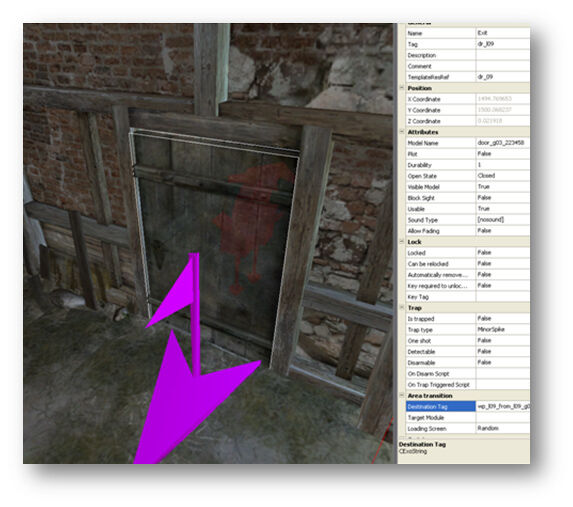 The most important fields to fill in:

Name – Here, set the name that is going to appear when you run the cursor over the object during the game.

Usable – True means that the player can use them. False results in them being totally out of the player’s reach (but other characters may still use them).

Locked – True means that the door is locked and you need a key to open it.

Key Tag – here, enter the Tag of an object that the player needs in order to open the doors.

Destination Tag – the most important thing; enter the Waypoint Tag of the place in which the player is to appear after entering the door. A Tag may consist of a chain of any numbers and letters and the sign ‘_’. A Tag CANNOT include any spaces.

Target Module – The name of the Target Module. Fill in only if the Waypoint is located in the different module than the door.

Scripts: On open – Here, enter the script that is to trigger something more apart from teleporting the player to a different location. Usually it is dr_auto_close. This script closes the door after a short while.

Next, a point of destination – Waypoint, has to be set. 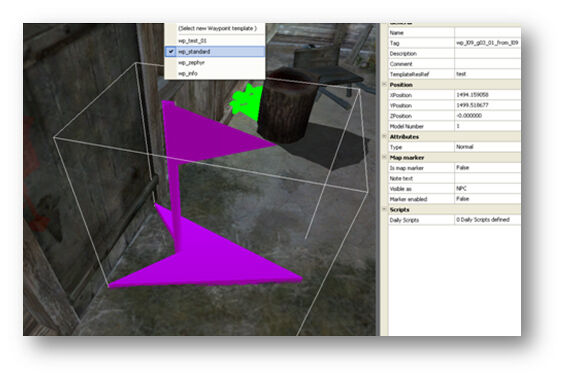 In the open Area Editor, find a place on the screen where the character will appear after walking through the door. Next, find a blue flag icon on the bar in the upper part of the screen and click on a small black triangle on the right side of the flag. Choose wp_standard from the menu (if there is none, click on Select new Waypoint template, look for the file and add it to the menu.) The object visible on the above picture should now follow the cursor (it may differ in color). Now, click on the spot where the character is going to appear; the object should be set in this place. You can place other objects, if needed. When you are done, choose an arrow on the upper iconbar (first icon on the left). Now, double click with the left mouse button on the object set by you on the screen. A window shown in the above picture should appear on the right side. By the Tag field, enter the same sequence of signs as in the case of the Destination Tag and save the changes in the module.

Thus created passage should work perfectly. Now, you have to set the direction the character will be facing at the destination point (usually, it has the door behind the back.) This direction is indicated by the tip of the arrow being the base of the Waypoint. If you don’t like this direction, change it (See: Setting of the objects on the screen).

You can use the Triggers the same way as you use the doors. The advantage of them is that they can be placed everywhere. The disadvantage is that the player may easily enter it unintentionally.
One Waypoint may contain several Tags. If needed, enter them separated by a semicolon. This way one Waypoint may be the destination point of several doors. (Attention: The field Destination Tag may include only one Tag.

Community content is available under CC-BY-SA unless otherwise noted.
Advertisement