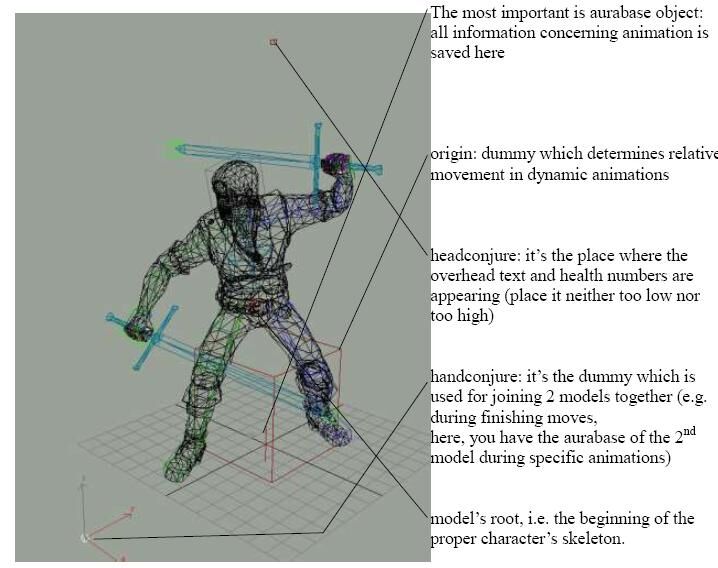 In order to export an animation, you need to have a correctly constructed model containing such elements:[edit | edit source]

The most important is aurabase object: all information concerning animation is saved here

headconjure: it’s the place where the overhead text and health numbers are appearing (place it neither too low nor too high)

handconjure: it’s the dummy which is used for joining 2 models together (e.g. during finishing moves, here, you have the aurabase of the 2nd model during specific animations)

model’s root, i.e. the beginning of the proper character’s skeleton.

Model, in order to have good orientation, has to be placed on axes in such order: Z – axis set ‘up’ Y – axis set ‘back’ (model’s front is on Y) X – axis ‘left’ The easiest way is do add helpers while viewing (in max) from above, then the objects have the proper orientation. YOU CAN’T CALIBRATE, MIRROR AURABASE, ORIGIN OR ANY OTHER SKELETON’S BONES (it leads to many errors, which are difficult to remove later on) BIPED in CharacterStudio can be modified (scaled, etc) YOU SHOULDN’T CHANGE BONES’ PIVOT (later, they will be moved to original place in the game)

AURABASE – it’s a helper created from the standard helper panel in 3dstudioMax. (you need to have appropriate .dll) 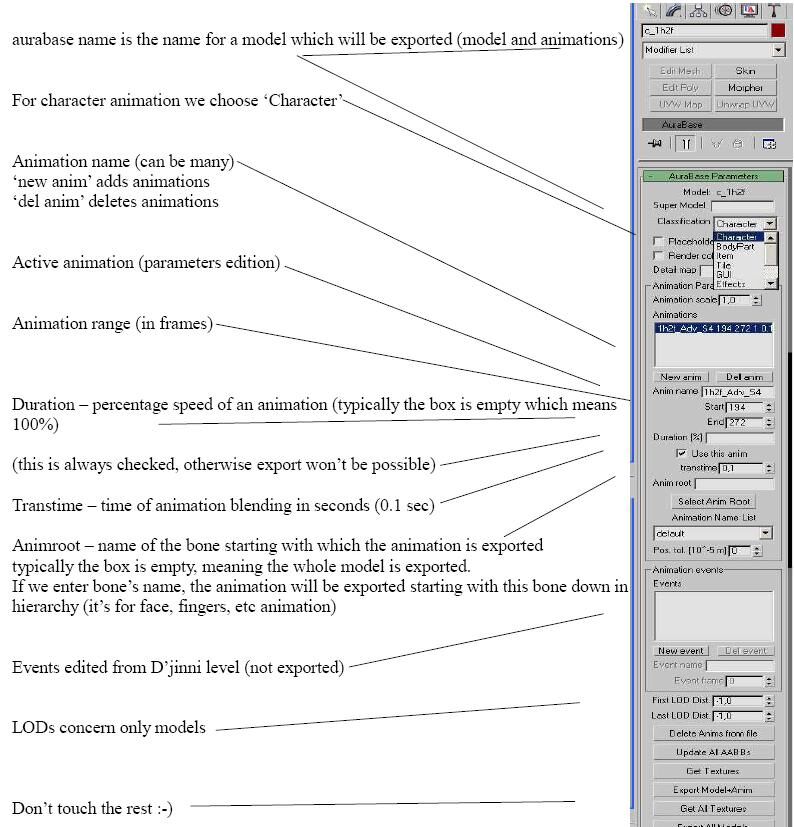 In a model, there can’t be any characterstudio standard names, i.e. **bip** – these bones won’t be exported.

k_ at the beginning of the bone means that the exporter will export every key in every animation frame; if there’s no k_ at the beginning of the bone, only the keys on the bone will be exported, you have to remember that the engine has only linear interpolation between the keys, so if (in max) we have prepared bezier animations on only a few keys, it will look completely different in the game; that’s why the majority of animations is exported with the key in every frame.

Only hierarchy linked to aurabase will be exported. All supporting bones, dummy and helpers can be used for animation, but have to be linked and therefore exported.

Only bone position and rotation are exported (the scale is not supported), plus some parameters, e.g. Alfa blend, etc (in materials).

rhand – compulsory dummy in a model, items are attached to it (weapons), range weapons shoot from rhand, monsters’ damage is calculated (if rhand in monster’s hand will go through the character)

lhand – the same for the left hand (shields, items, etc)

In the very end you should export T_pose animation.

T_POSE it’s a position of a model (skeleton) in which we attach skin, a zero position of hierarchy. T_pose has to be the last animation exported in a model.

Retrieved from "https://djinni.fandom.com/wiki/Exporting_Animations?oldid=8465"
Community content is available under CC-BY-SA unless otherwise noted.